Leadership styles have been widely studied in business management, politics and psychology over the years. Since all organisations have their own unique style and approach, it has been an area of great exploration and discovery, and the world of professional coaching is not immune to it either.

The role of the sports coach has been widely recognised as crucial in the progression and development of athletes. There’s plenty of research to show the benefits that a professional sports coach can bring to enhance performance, as well as motivation levels.

As part of the job, coaches spend a sizeable time with their athletes in both formal settings, like at competitions, and informal settings, such as spending time on the road. Their influence has been studied to see the impact it has on athlete performance and strategy.

One such line of study was by Bass in 1985. This is better known as  ‘transformational leadership’ theory which we’ll examine in more depth in this feature.

The Importance of Leadership

As any athlete, employee and team member knows, good leadership is at the heart of a successful organisation. Leaders are people we look up to, aspire to and look to, during the good times and bad. It is vital for an effective motivated workforce, and yet it is still an area that we are growing to understand in the industry of sports coaching.

But first, what is a leader?

The Business Dictionary describe a leader as a person who “holds a dominant or superior position within its field, and is able to exercise a high degree of control or influence over others.”

Understanding this, we can apply our knowledge to transformational leadership theory.

It’s over 40 years since the transformational leadership theory was developed (Burns, 1978). Originally intent for political leaders, it was later adopted in psychology circles too, since it has many transferable elements to it.

Burns’ theory suggests that transformational leaders are those who inspire followers on an emotional level, with the ability to sacrifice self-interest for the greater good. In his own words: “Leaders and followers help each other to advance to a higher level of morale and motivation”.

He was able to see the challenge in organisational management, suggesting that the differences lie in an individual’s characteristics and behaviours. Out of this, he formalised two managerial styles.

He believed each of these were mutually exclusive.

The first style was identified as ‘transforming leadership’ – this is about taking a moral approach. It focuses on making a significant change for people and organisations holistically by evaluating values and perceptions.

The second style is defined as ‘transactional leadership’. It’s about an approach based on the leader’s personality, utilising their skills to change the status quo.

An important distinction to note, is that transformational leaders strive for cultural change in the organisation, while transactional leaders work within the existing culture.

This understanding of transformational leadership is said to describe a number of behaviours and attributes that impact on one’s trust and loyalty to the leader and can be applied in all forms of business, including sports coaching. Research around this has led experts to believe that by applying these forms of leadership, we can positively predict performance outcomes too.

It has been the focus of much discussion as to how one can measure and evaluate leadership qualities.

One of the most widely adopted ideals comes from Bass’ work (1985) on transformational leadership.

This originally outlined ‘charismatic leadership’ defined by a person who inspires respect, pride and a sense of mission to those who follow them. While ‘intellectual simulation’ refers to a leader that makes people think differently about a situation, forcing others to think about problems in new ways. And finally, there’s ‘individualized consideration’ – where everyone is treated like an individual.

This lead to the Full-Range Leadership Theory (FRLT) that is made up of; transformational leadership, transactional leadership and laissez-faire leadership. There has even been a scale to help in some way measure the effects of these.

When researching leadership components, a survey was implemented called ‘the Multi Factor Leadership Questionnaire’ or MLQ Form 5X for short.

This looked at a number of elements as part of its scale, these include;

Relating this back to the world of sport, transformational leadership has been proven to be effective across a range of business fields, least of all, sport.

Applying this to Sports Coaching

There is much value that these theories can provide to athletes and sports coaches, to help fulfil their potential. However, in the busy world of professional coaching, it is important to distil this insight into easy to understand bitesize take-away information.

When one considers that sports coaching is a ‘people’ business, that involves developing relationships with others and involves daily interactions with athletes, it’s also clear that quick decision making is important in this profession. As such, it would be helpful to condense the findings into digestible nuggets to share.

However, with so many complexities to take in to consideration, this is not always the easiest concept to reduce.

This has been highlighted by others in the field, including Langan, Blake and Lonsdale (2013), who drew a distinction between short-term memory retention and long-term knowledge in real life scenarios. On top, it applied the transformational leadership theory to an applied context – the vision, support and challenge model (VSCM). Here we look at this in a bit more detail:

What is beneficial about the VSCM model, is that it suggests that great coaches inspire athletes by providing an inspiring vision for the future. They also provide the challenge to help them achieve that vision too. However, it is predominantly about the coach provisions, which to some extent are determined by the individual and the context.

Although findings suggest that transformational leadership has positive effects on athlete outcomes in any type of sport as well as age, level and nationality, there is still much more that can be researched in this field.

One such improvement would be to look at other data, notably behavioural data, alongside the existing surveys. Plus, it would insightful to look beyond the simple main-effect paradigm and look at mediating and moderating variables and which are more likely associated with transformative leaders. It would be useful to see how personal traits, such as anxiety might have an effect too.

There have been minimal observer reports on the behaviours and qualities displayed by coaches, which have been useful illustrations. Since they adopt multiple methodologies in their research, they can help us better understand coach behaviours in motivating team members and assisting with learning.

As a development tool, transformational leadership is applied with some success in organisations the world over. It has proven to be a useful tool in both the political and business sense.

As those who have studied transformational learning have also concluded, the theory offers a stable platform in which to build upon for future research.

However, it may not give a complete picture in the absence of other behavioural qualities that sports coaches may possess. It does not always look at some of the inspirational effects that coaches may offer. Therefore, future studies should look at how these can be integrated to offer a more balanced approach.

Bringing together coaching practice with coaching theory is one such way of exploring how observational techniques can be used in partnership with athlete expectations.

That all said, transformational leadership has been shown to help improve motivation, morale and performance, as a productive approach to organisational behaviour.

At the heart of all of this however, we must reflect back on purpose. The role of the sports coach is not merely to serve the athlete and enhance their performance, but to also inspire, to lead and to be a role model too. As long as we don’t lose sight of this amongst the body of literature and research available, it will serve us well! 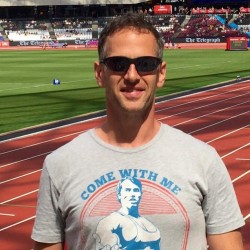 Iain is also registered as a Practioner Psychologist with the Heath and Care Professions Council (HCPC).

Additionally, Iain is a Solution-Focused Brief Therapist and a Spotlight Practitioner.

As a Practitioner Sport and Exercise Psychologist, Iain works with a number of professional athletes and teams. He works across a range of sports and also provides performance psychology to business professionals.